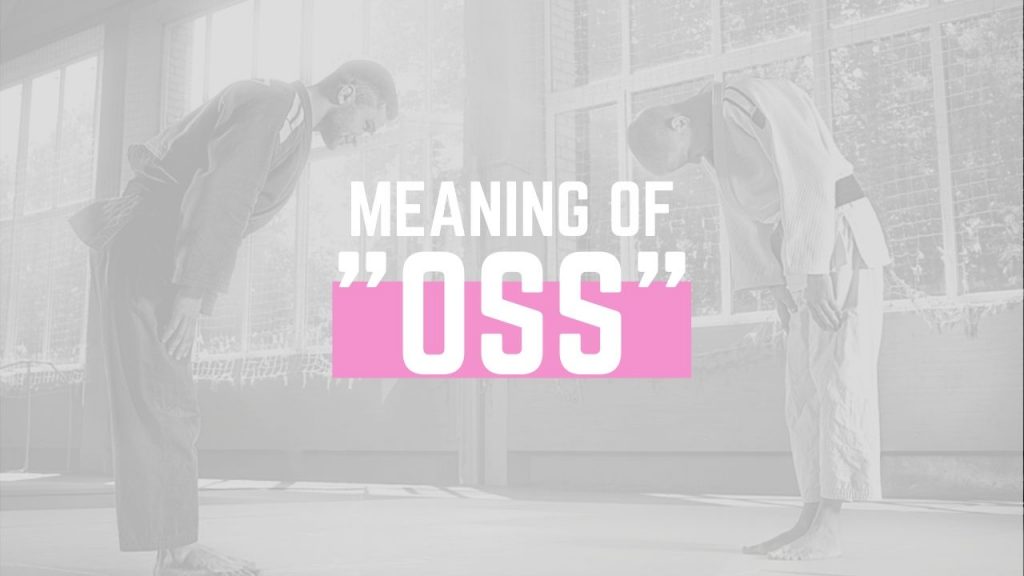 A long time ago, Grand Master Carlson Gracie borrowed the term from Judo and introduced it to Gracie Jiu-jitsu as a sign of respect. It is still commonly used today in BJJ and MMA.

The term “oss” or “osu” is not exclusive to jiu-jitsu and is used across all martial arts, especially the Japanese arts. Some students claim that it originated in Okinawa, the birthplace of Karate.

You’ll hear this often during jiu-jitsu class as a greeting or response. The term can mean everything and anything – including “hi,” “okay,” “thanks,” “I understand,” “train harder,” and “goodbye.”

It’s the ultimate expression for all martial artists, insanely useful.

History and Origins of “Oss”

Funnily enough, many Japanese people don’t know where the expression comes from, but several theories exist on its origins and true meaning.

I dug deep and found out that the expression “Osu” first appeared in the Officers Academy of the Imperial Japanese Navy, according to history books. That’s somewhere in the early 20th century.

According to Jesse Enkamp, the term “osu” is non-existent in traditional Karate dojos of Okinawa, and they use “hai” instead.

This tells us two things:

What does “OSS” mean?

“Oss” is an abbreviation for “Onegai Shimasu” and has its roots in traditional Japanese Okinawan Karate. It can be interpreted as a request, a solicitation, or an invitation like “please” or “with your permission.” It’s believed that because “Onegai Shimasu” was a mouthful for westerners, they shortened it to “oss.”

Another definition of “osu” is Oshi Shinobu, which pushes forward the idea of persevering. In other words: be determined and never give up, have grit and withstand the physical demands of training. These are all core elements of Asian culture.

How do you pronounce OSS?

I’ve heard two different pronunciations in the West, one with an “o” (as in dog) and the other with “oo” (as in foot). It’s definitely not pronounced as “oosh” or “oos”. In reality, it sounds like “osssss” more than anything else.

When should you say “OSS”?

Be aware that every gym has different etiquette, so pay close attention to your surroundings and imitate others. BJJ classes are usually laid back, so don’t worry if you don’t say it or say it at the wrong time. You won’t get scolded or laughed at.

You can use the term “oss” as a greeting, response, a compliment, or a sign of respect.

When should you not say “OSS”?

Oss is a term that marks strength, assertiveness, and masculinity in Japan. You could find yourself in hot water for saying it to the wrong person.

Say it to a Japanese person only when:

Japan is more rigid than Western culture, so you should be aware that when you say “oss,” it might be considered rude when said to a Japanese person.